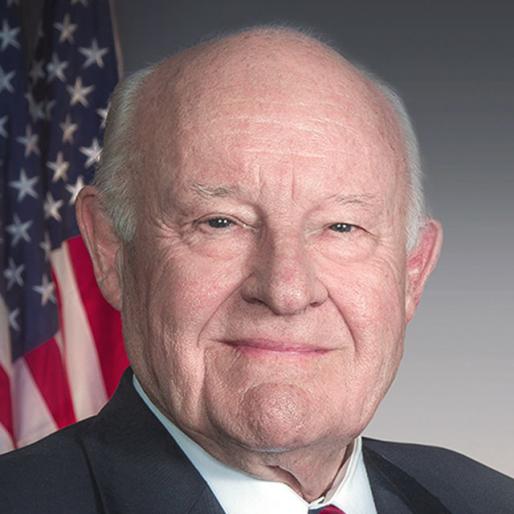 Dr. J. Phillip (Jack) London was the Executive Chairman and Chairman of the Board of CACI International Inc (NYSE) from 2007 until his death in January 2021. At the time of his passing, CACI was a $5.7 billion company and a member of the Fortune 500 Largest Companies with more than 22,000 employees worldwide.

Known as the founder of the modern-day CACI, Dr. London served as President and Chief Executive Officer (1984-2007), growing the company from a small professional services firm to become a worldwide information technology (IT) leader. In his more than 45 years of senior leadership within the organization, London shaped CACI into a trusted partner to the U.S. Government, providing advanced IT support for high-priority national security missions.

Dr. London oversaw CACI’s major strategic initiatives and transactions, including a highly successful M&A program that he began in 1992. Since that time, the company has made 79 acquisitions, adding customers and expanding capabilities in all its market areas. As Executive Chairman, he established CACI’s Culture, Character, Integrity, and Ethics Committee in 2015. In 2018, CACI opened the Dr. J.P. (Jack) London Shared Services Center in Oklahoma City, OK in his honor as a visionary business leader and Oklahoma City native.

Dr. London was a graduate of the U.S. Naval Academy (1959) and Naval Postgraduate School (1967), where he earned, respectively, a bachelor of science in naval engineering and a master of science in operations research. He was inducted into the Naval Postgraduate School Hall of Fame (2011) and was named a U.S. Naval Academy Distinguished Graduate (2019). He held a doctorate in business administration conferred with distinction from The George Washington University (1971) and received the university’s Alumni Achievement Award (1996). He was also presented with the Alumni of the Year Award from the university’s School of Government and Business Administration (1987) and CEO of the Year Award from the university’s Executive MBA Program (2003).

In 12 years of active duty with the U.S. Navy (1959-1971) during the Cold War, Dr. London served as an officer, naval aviator, and carrier helicopter pilot with the Navy’s “hunter-killer” task forces arrayed against the Soviet Union’s strategic nuclear submarine threat. He saw service during the Cuban Missile Crisis (the “Thirteen Days” of October and November of 1962), and his 33 at-sea deployments included the North Atlantic, the Mediterranean, and the Caribbean. He was with the airborne recovery team for Col. John Glenn’s Mercury Program space flight in Friendship 7 in the Caribbean, on February 20, 1962, on the U.S.S. Randolph. At the height of the Vietnam War, he served as Aide and Administrative Assistant to the Vice Chief of the Naval Material Command, Department of the Navy (1969-70). Subsequently joining the U.S. Navy Reserve, he served as an aeronautical engineering duty officer and commanding officer of reserve units in the Naval Air Systems Command (1971-1983), retiring as a naval captain.

Dr. London served as Chairman of the Board from 1990 until his death in January 2021. He first joined CACI as a program manager in 1972, later advancing to vice president (1976) and division president (1982). Elected to CACI’s Board of Directors in 1981, he was appointed President and CEO in 1984 and directed CACI’s operational turnaround in 1984-85 for both revenue and profit.  His strategic vision in the 1990s transformed the company into a sharply focused IT organization, setting company records for revenue and profit, and positioned CACI for the emerging market in network technology. By the 2000s, he had expanded CACI into the intelligence and homeland security arenas to support government capabilities during an era of heightened national security threats. In 2008, he co-founded the Asymmetric Threat Symposium Series with Lead Board Director Dr. Warren R. Phillips to advance the dialogue on national and global security.

Throughout his career, he oversaw the company’s bank financing and line of credit transactions, reflecting his experience as a senior corporate financial manager. In 2002, Dr. London led CACI through its first equity offering since CACI’s initial public offering of 1968; the company issued a total of approximately 4.9 million shares of common stock, with gross proceeds of approximately $171 million. In 2004, Dr. London led CACI in raising a new revolving credit facility and institutional term loan, totaling $550 million, and in 2007, he led CACI’s sale of $300 million in senior subordinated notes, adding to the company’s capital structure for increased financial flexibility. As Executive Chairman, he continues to monitor the company’s major financial transactions.

A nationally recognized authority on organizational ethics, Dr. London was honored by the HR Leadership Awards of Greater Washington with the establishment of its Ethics in Business Award in his name. In 2014, he was named by the Ethisphere Institute as one of the Most Influential People in Business Ethics. He is the author of Our Good Name, documenting CACI’s record of meeting the urgent needs of a nation at war; and Character: The Ultimate Success Factor, a practical demonstration of how good character and ethics are the key to long-term success for both organizations and individuals.

Dr. London served on the board of directors of the U.S. Navy Memorial Foundation, Naval Historical Foundation, Friends of the National WWII Memorial, Senior Advisory Board of the Northern Virginia Technology Council, and CAUSE (Comfort for America’s Uniformed Services), the wounded warrior support organization. He has also served as a director of the U.S. Naval Institute and director and member of the Executive Committee of the Armed Forces Communications and Electronics Association. He has served on the Advisory Council at The George Washington University School of Business, the Board of Advisors at Marymount University, and the Board of the Boy Scouts of America, National Capital Area Council. He was a member of the National Military Intelligence Association, Intelligence and National Security Alliance, Navy League, U.S. Naval Institute, Naval Order of the U.S., American Legion, Association of the U.S. Army, Veterans of Foreign Wars, Robert Means Thompson Society, and the President’s Circle of the U.S. Naval Academy Foundation.

A native of Oklahoma, Dr. London resided in the Washington, D.C. area from 1969 until his death. He was married to the former Dr. Jennifer Ellen Burkhart of Ohio. They have three young sons. He also has two adult children and six grandchildren.